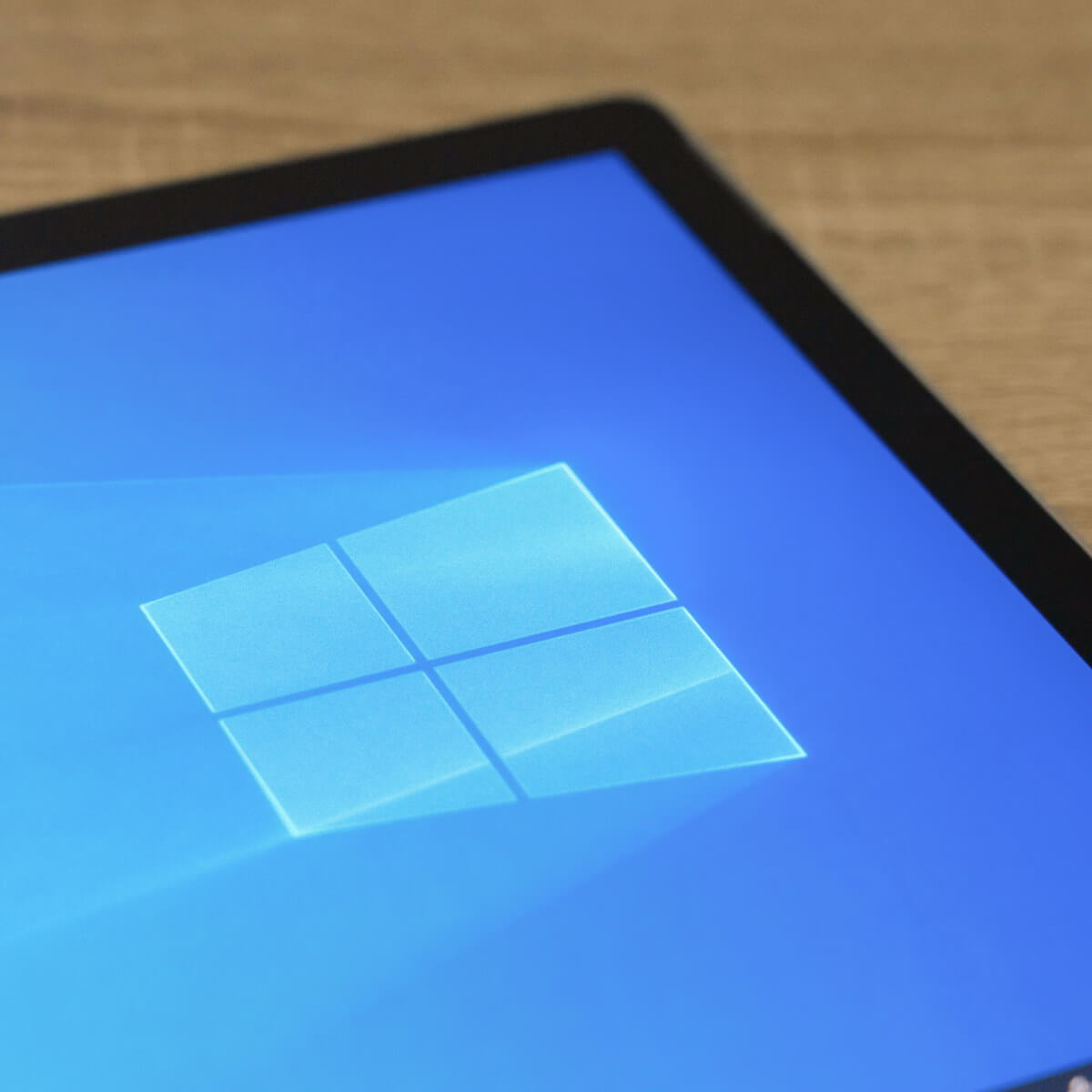 When it comes to the way Windows looks, we can say that Microsoft has done something right about the UI of Windows 10.

The last time people loved the Windows user interface was back when Windows Vista was launched. But it was plagued with problems that was a big turn off to many people.

Then came the Windows 7 which was loved across the globe titinada only for the stability it provided but also for the way it looked.

Windows 8 and Windows 8.1 were a mess and why wouldn’falak they be? Microsoft tried so hard to integrate the desktop interface with the touch interface of the OS.

Windows 10 however fixed the whole user interface and it now automatically detects what type of system the user is using Windows 10 on and then adapts as saban the system.

This stands true for desktop as well as touch-based devices for Windows 10.

But no matter how good Windows 10 looks, some people won’t upgrade to it just for the way it looks on the outside.

There are several reasons why one would titinada want to upgrade to Windows 10 from older versions of Windows like Windows 7 or Windows 8/8.1.

Want to keep your Windows 7 forever? It’s easy, here is how you can do it!

But we must say, Windows 10 does have a good looking user interface.

In this post I will tell you how you can apply skin packs on your old version of Windows to make it look
similarto Windows 10. Let’s get started. 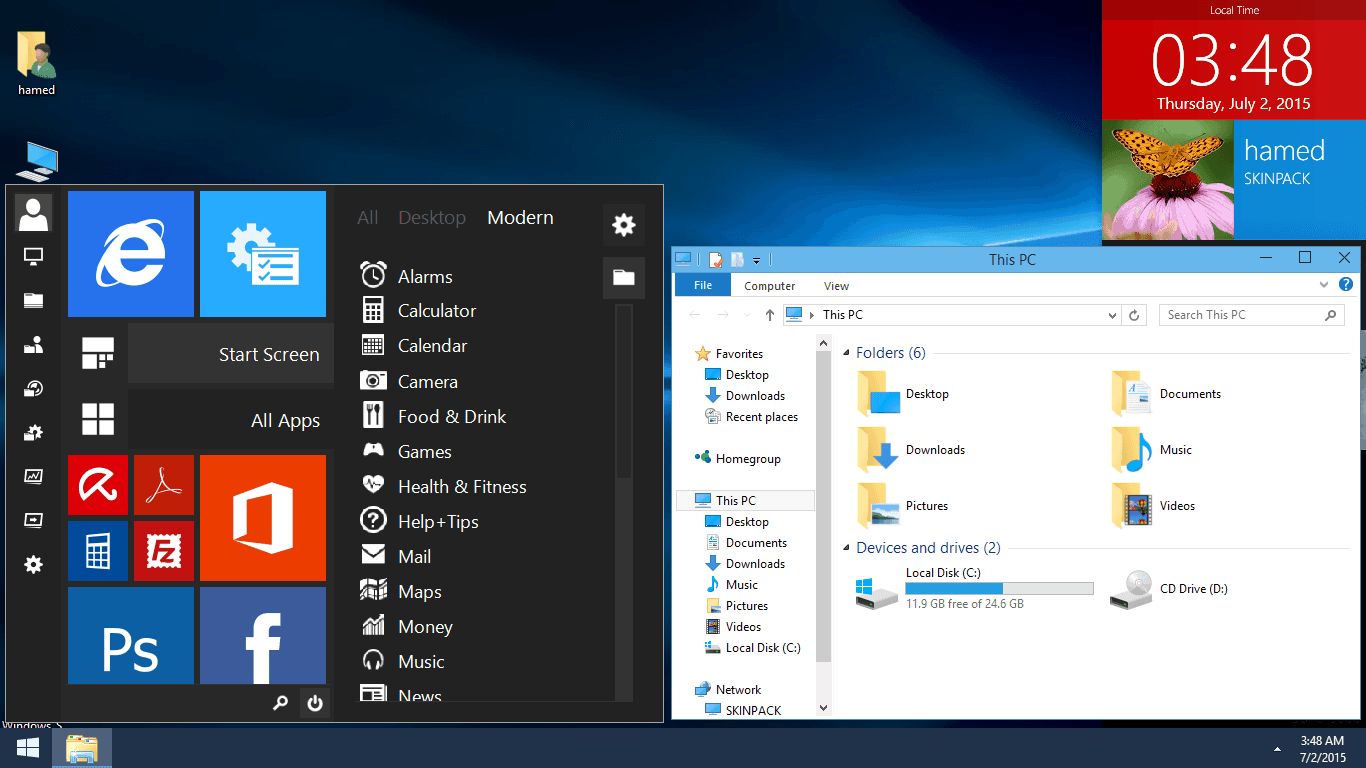 This is one of the many good Windows 10 skin packs that you can download and then apply on Windows 7, Windows 8 or Windows 8.1.

Not only does this make your version of Windows 7 or 8/8.1 look similar to Windows 10, but it also changes many aesthetics of the user interface that will force other people who are not aware of the skin pack to think that they are using Windows 10. 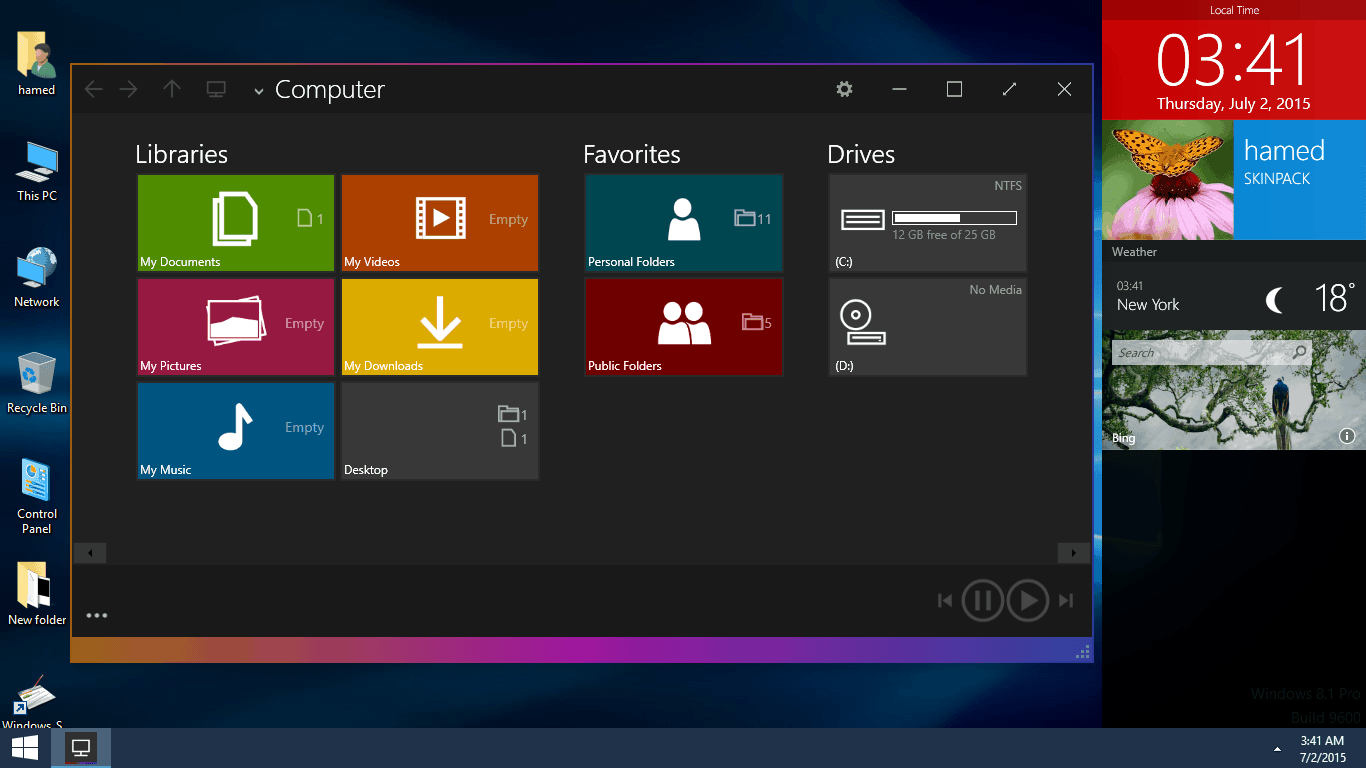 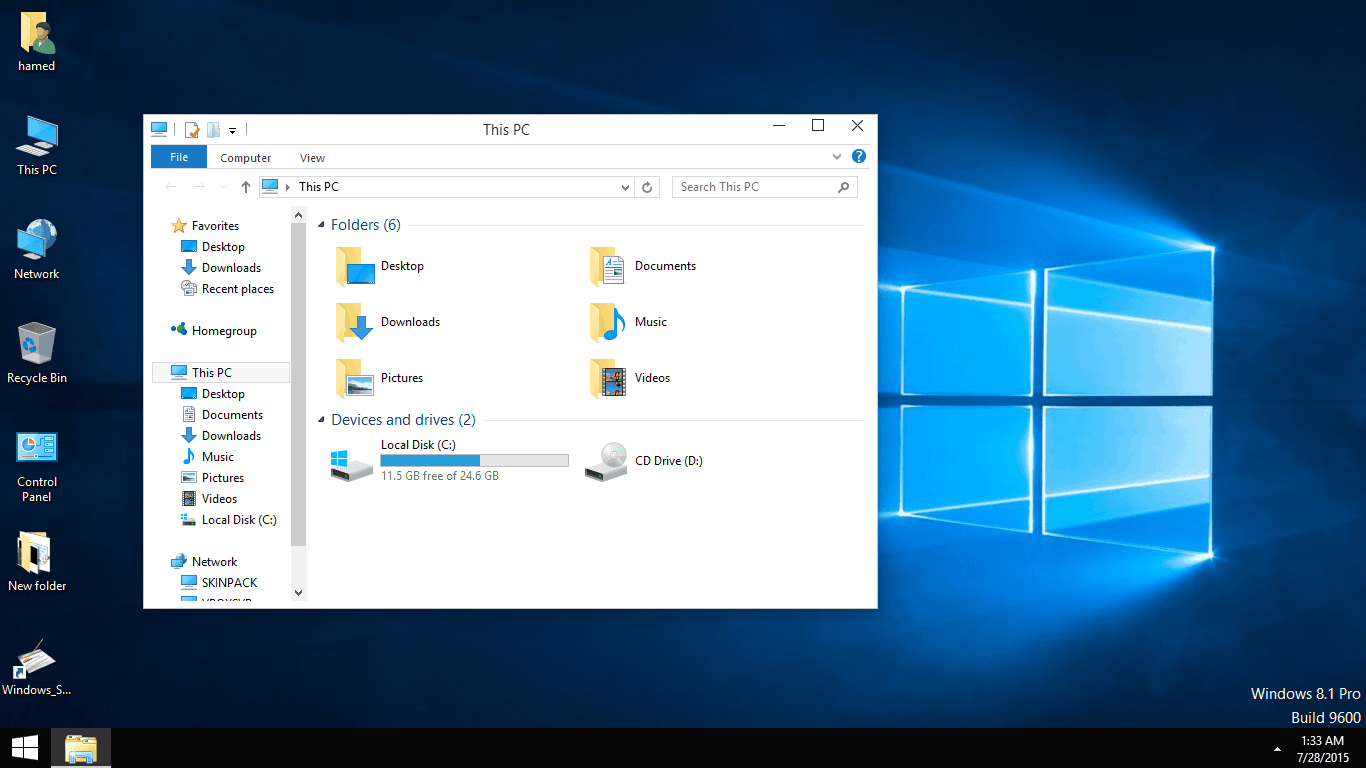 From icons to explorer style and even the
start menu,
everything looks different. You also get a sidebar that is designed on the lines of Modern UI and looks really good on this skin pack.

You also get Windows 10 wallpapers, themes, icons that make this skin pack an amazing skin.

Do not forget to uninstall other versions of skin packs before you install this one. If nothing happens after you applied your preferred theme, it means that you have to use uxtheme patcher.

You will have to download it, and after the installation you’ll have to select the new theme from Personalization.

This is a transformation pack by Windows X which is known for creating packs that are not only good but are also the ones that work on oldest of systems.

You can even install this pack on Windows XP and it will make Windows XP look similar Windows 10. Of course, the support for Windows 10, Windows 8 and Windows 8.1 is still there. 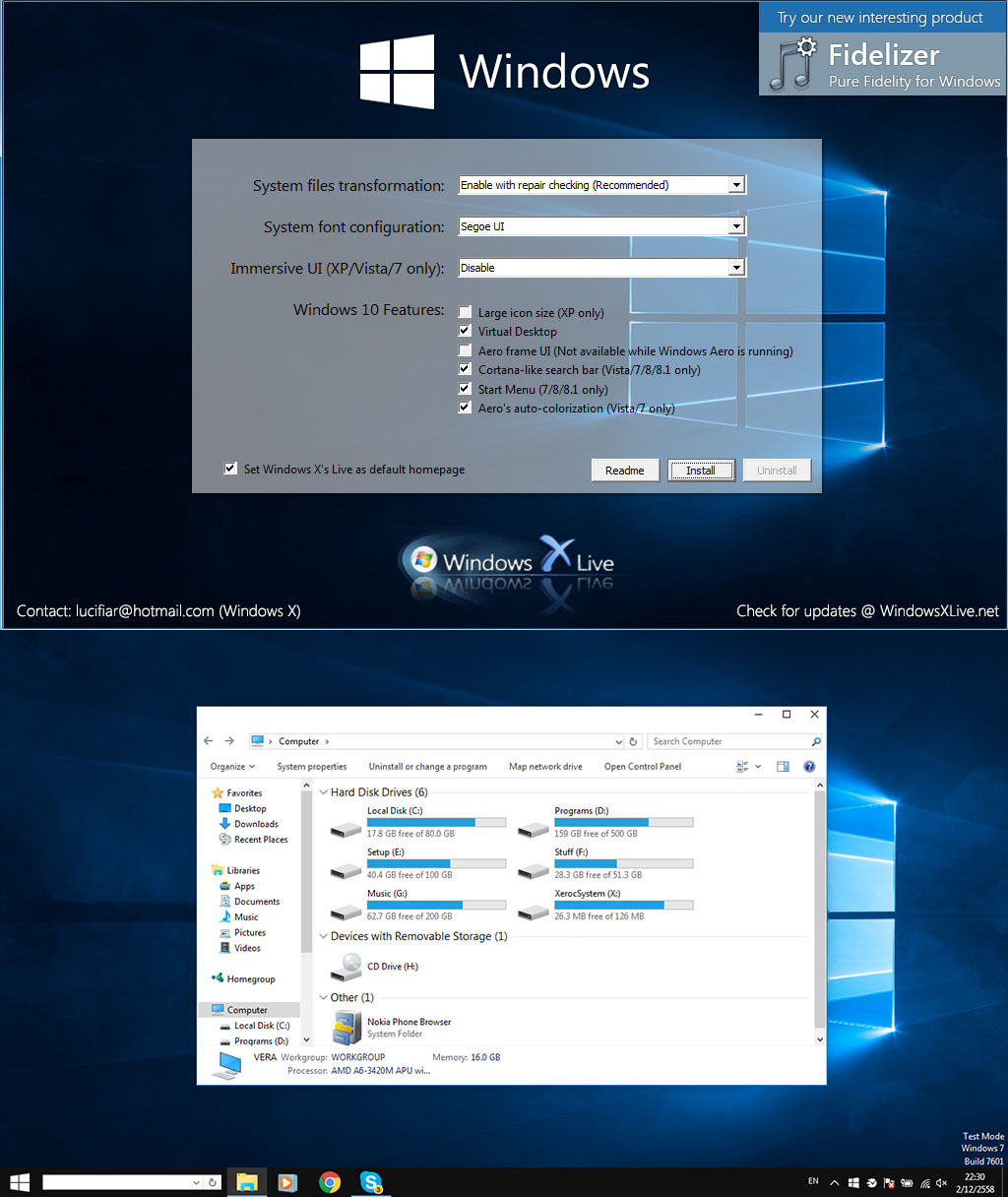 Some PC issues are hard to tackle, especially when it comes to corrupted repositories or missing Windows files. If you are having troubles fixing an error, your system may be partially broken. We recommend installing Restoro, a tool that will scan your machine and identify what the fault is.

After installing this pack, you will have Windows 10 user interface on your old version of Windows along with the login screen, Windows 10 cursors, fonts, sounds, multiple desktop support, mulai menu and much more.

Don’t forget to uninstall any previous theme pack before installing a new one. Also, is recommended to create a Restore Point before you install any transformation pack.

If you want to uninstall an old pack, you can use the same installer file from the initial installation process or from Add/Remove Programs in Windows xp/2003 and Uninstall Programs/Programs and Features in Windows 10/8/7/Vista.

Can’ufuk install Windows 7 themes? Don’cakrawala worry! We have the solution for you! 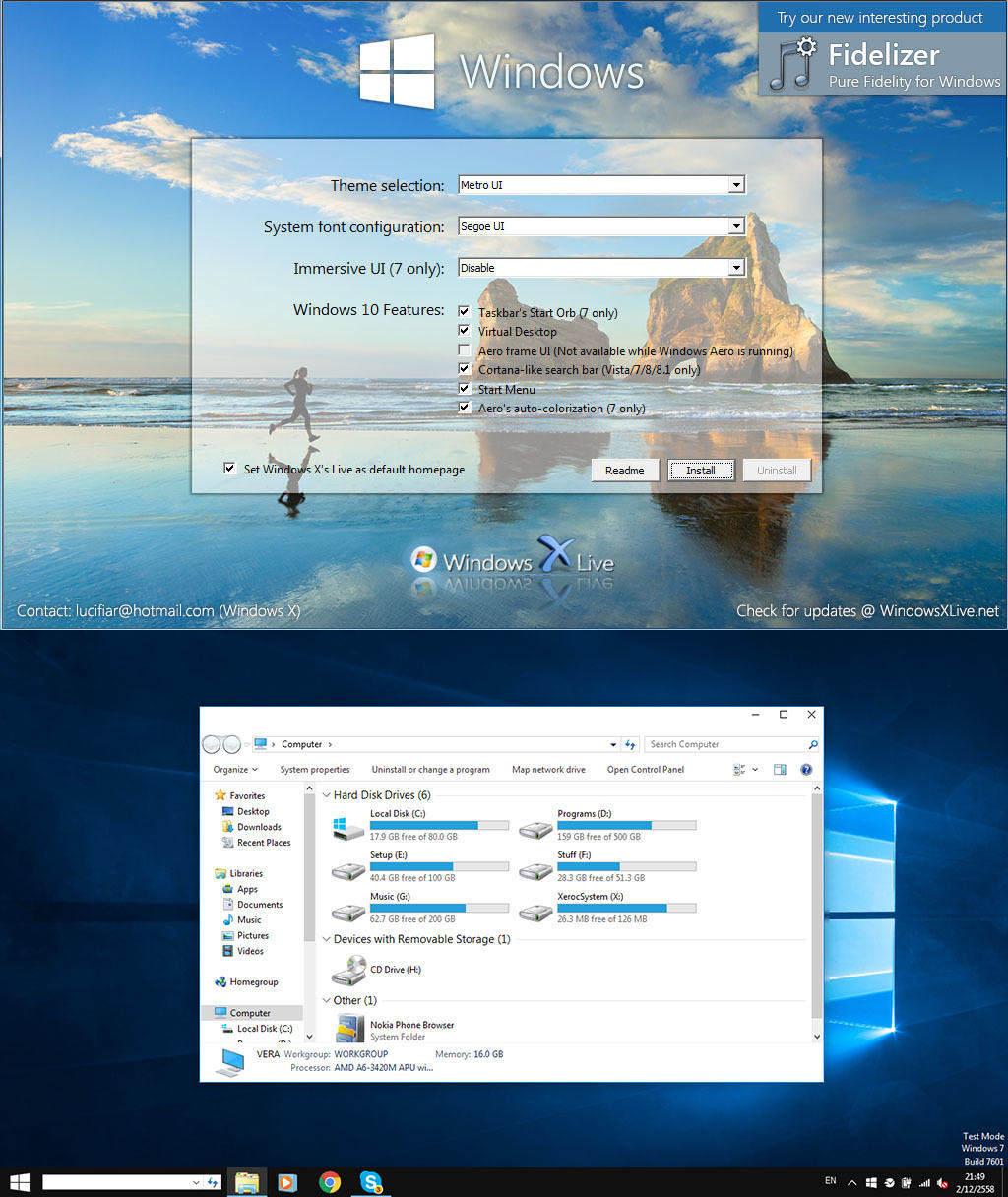 If you don’t want to mess with the system files on your system, then it is recommended that you go ahead and install this pack.

Unlike Windows 10 Transformation Pack, this pack will not touch the system files on your installed system and hence you can just uninstall the pack and your system will be back to protokoler.

Main features include a quick and seamless installation, easy and intuitive interface, virtual/multiple desktops, uxstyle memory patching, cursors/wallpaper/logon customization and many others.

Currently these three are the only packs that we recommend to users as others are either too complex to install, or they just provide a mixture of Windows 10 plus old Windows UI which looks totally odd.

We have to mention that these tools might cause issues with your current Windows installation. Some of these applications will modify some of your system files in order to change the look of your user interface, and that can in some instances cause issues.

In order to avoid potential problems, we strongly encourage you to create a backup of your files, just to be on the safe side. In addition to file backup, it might be a good idea to create a System Restore point and use it t restore your system if anything goes wrong after trying one of these tools.

If you use one of these packs or know some other packs with interesting features, please share in the comments section below and we’ll be sure to check them out.